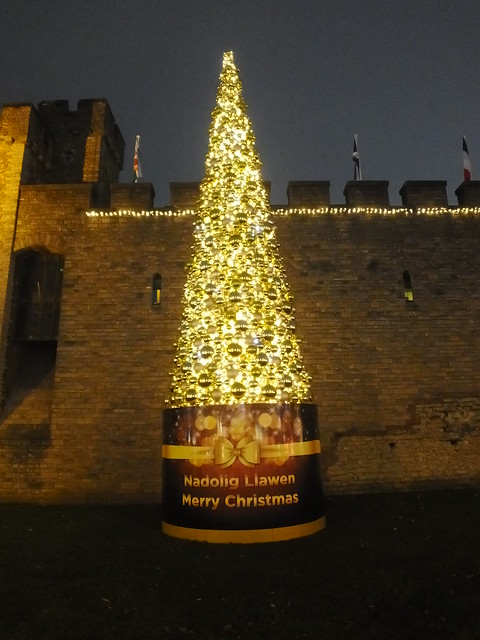 It’s that time of the year when Mariah Carey is blasting out everywhere, the Coca Cola truck causes traffic chaos and a fake gold tree causes Cardiff Council to apologise for the late delivery of a smaller than expected Christmas tree – yes it can mean only one thing – Ittttttsssssssssss Chriiiiiiiiiiiissstmaaaaaaas!

Over the last couple of years one other thing that has signified the start of the Christmas period has been the advent of commercial companies using street artists to get their corporate messages across.

Remember these for the Dogs Trust or Dulux?
Click each photo to read more on those previous works.

So for Christmas 2016 Starbucks have now jumped on the bandwagon and commissioned a host of street artists to paint in some of the larger cities across Britain. 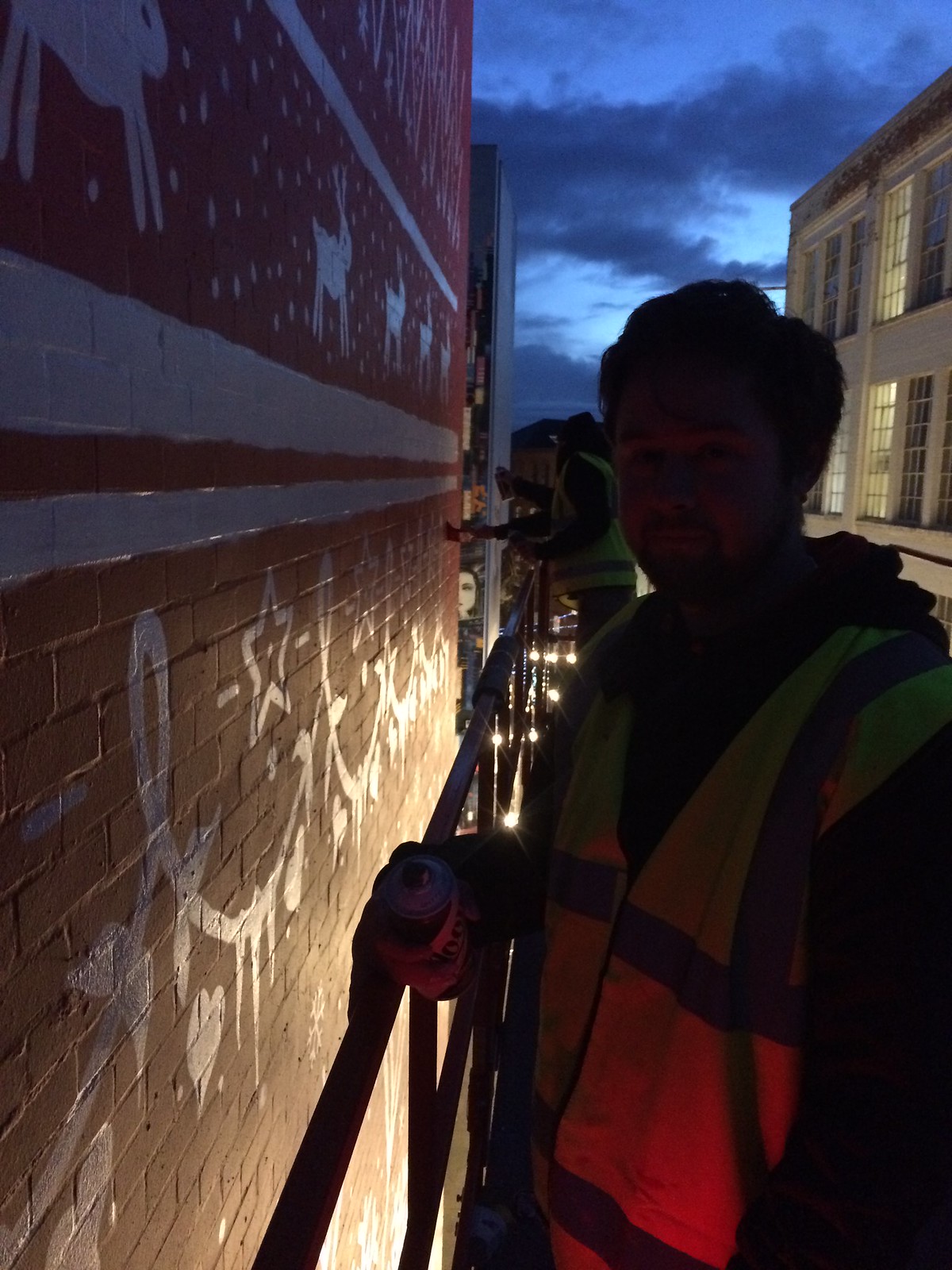 The festive theme was to help celebrate the launch of their red festive cups which this year have been designed by 13 members of the public selected from across the world.

Well respected artist Tizer kicked things off by painting the huge wall at The Custard Factory in the Digbeth part of Birmingham.

A red festive design from one of the cups was painted on this wall featuring a giant snowflake design. 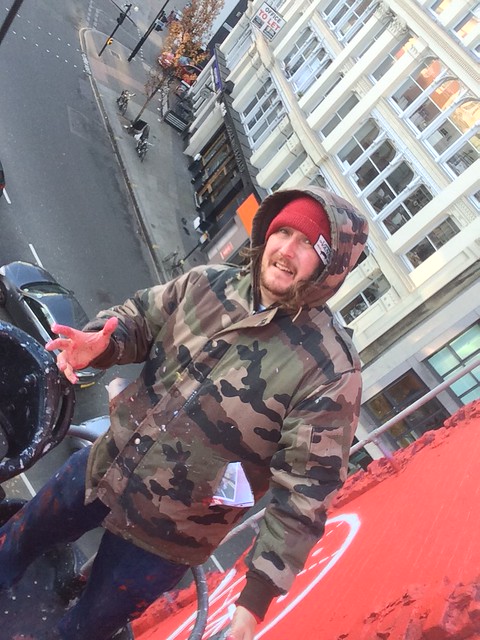 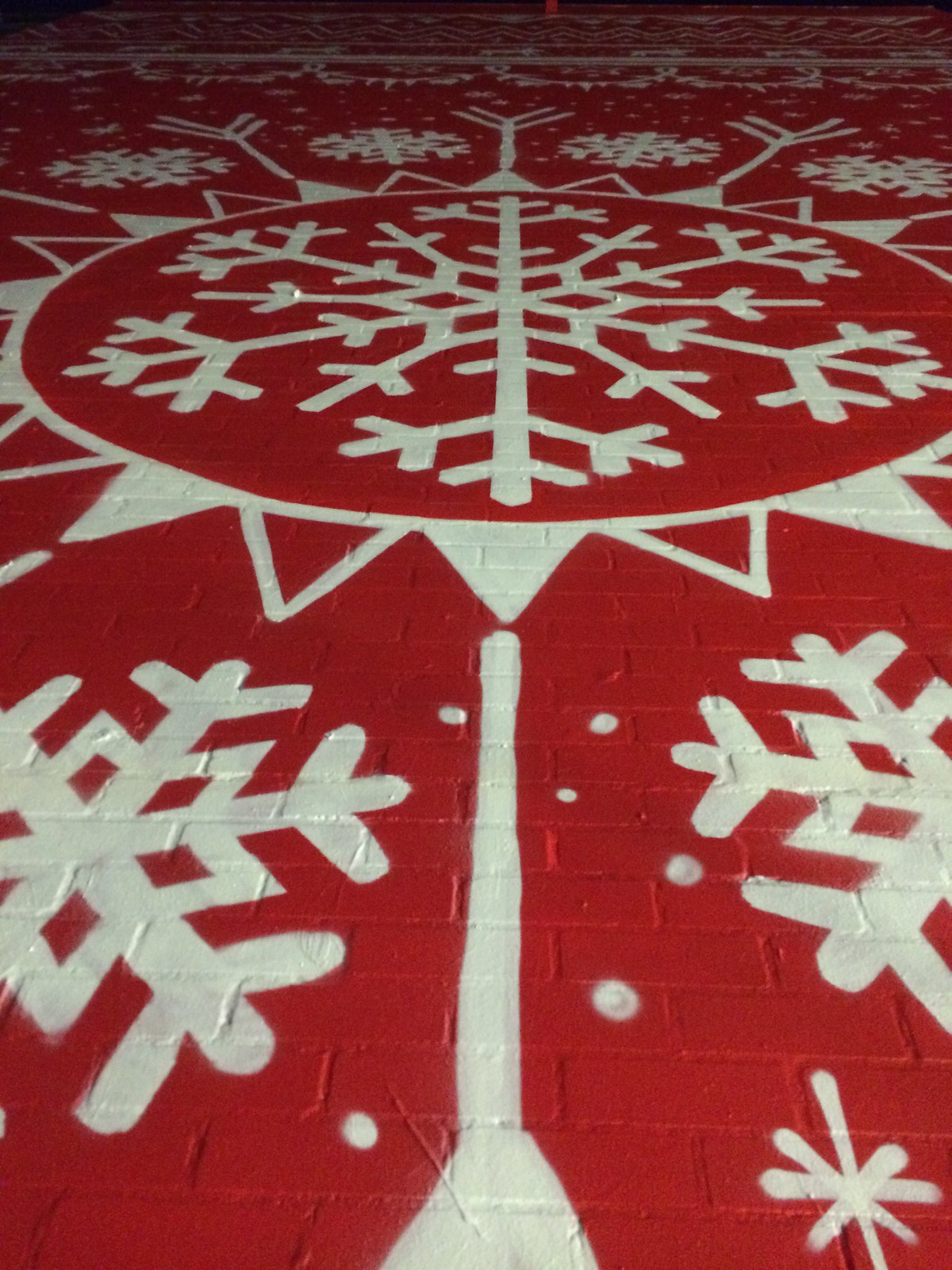 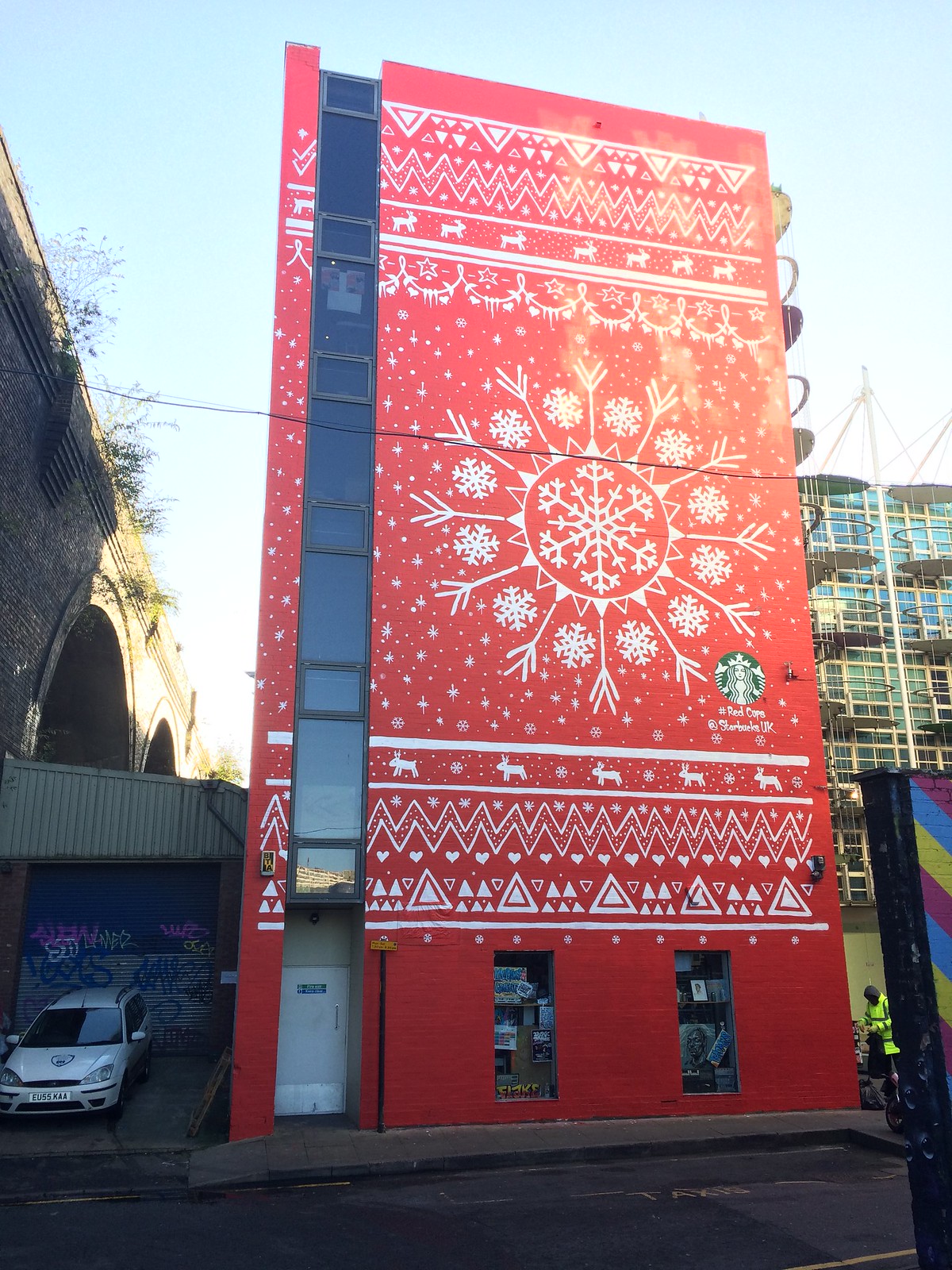 Tizer returned a week or two later to paint the wall red and start all over again with another cup design!

Tizer also painted another wall somewhere in London featuring another TWO designs from the festive cups. 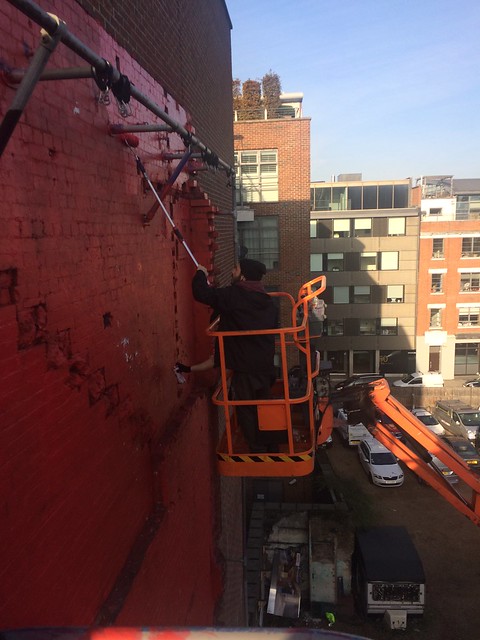 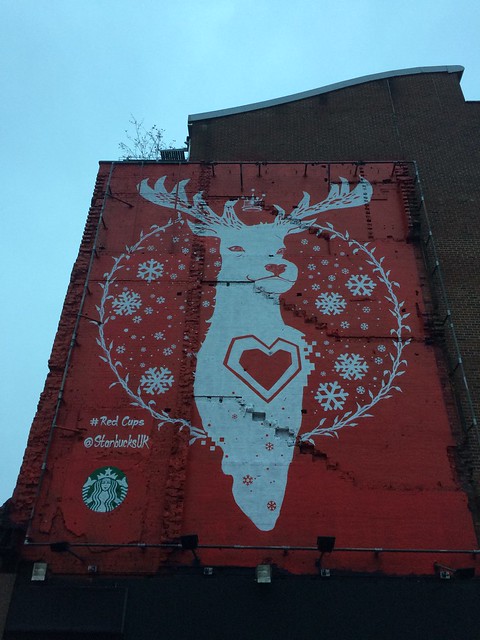 Firstly this reindeer was painted which later on was replaced with another design featuring Santa and his sleigh over a festive Starbucks landscape.

Well we are up here shitting it while your having a roast…. 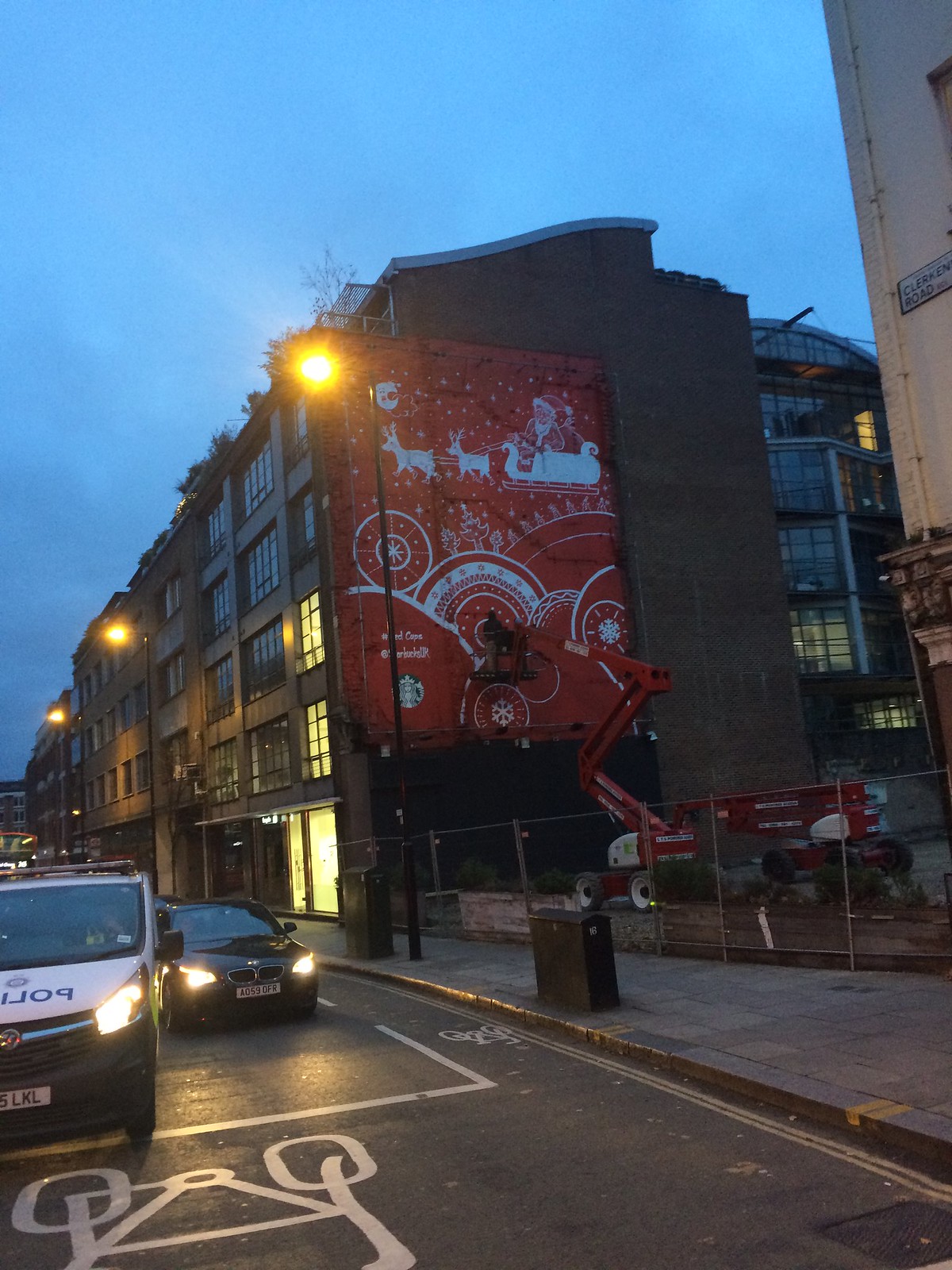 Now a further piece has appeared on James Street in Cardiff Bay featuring a striking design of a trail of Christmas lights spelling the phrase ‘Red Cups’ – possibly painted by local artist Rmer. 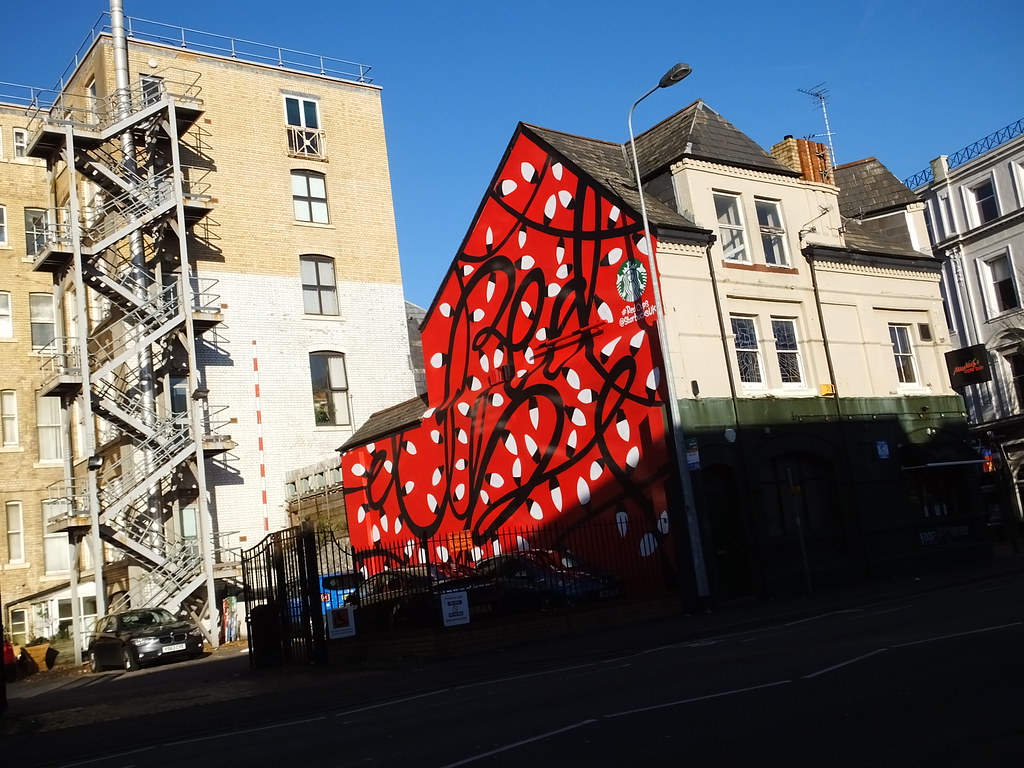 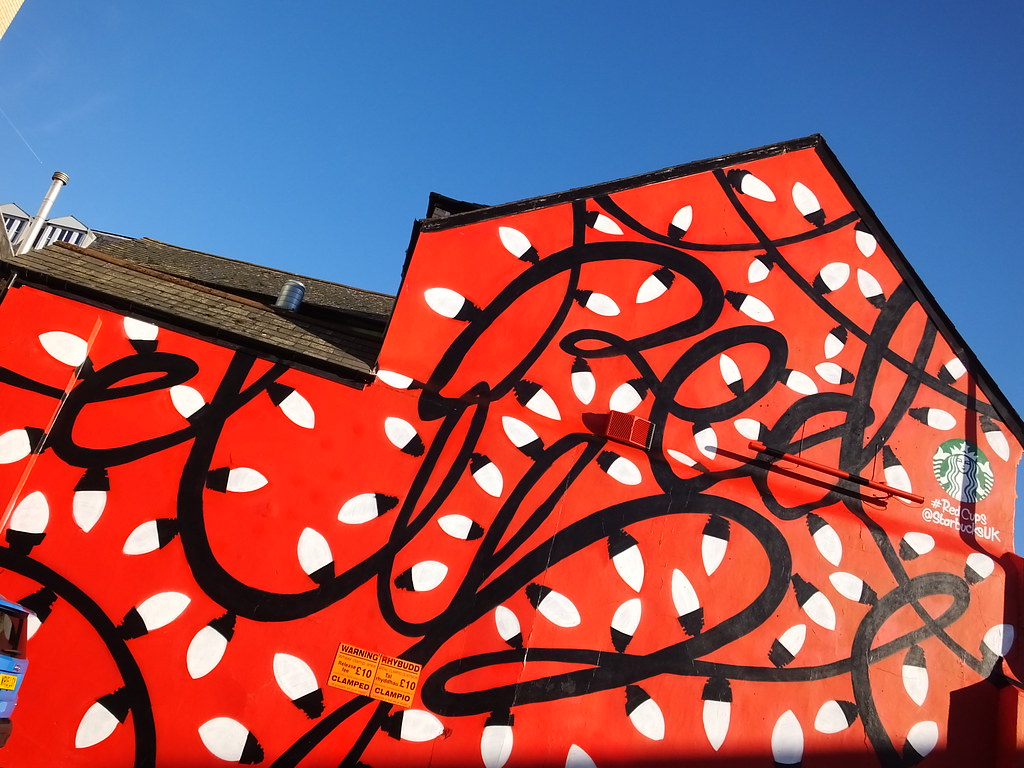 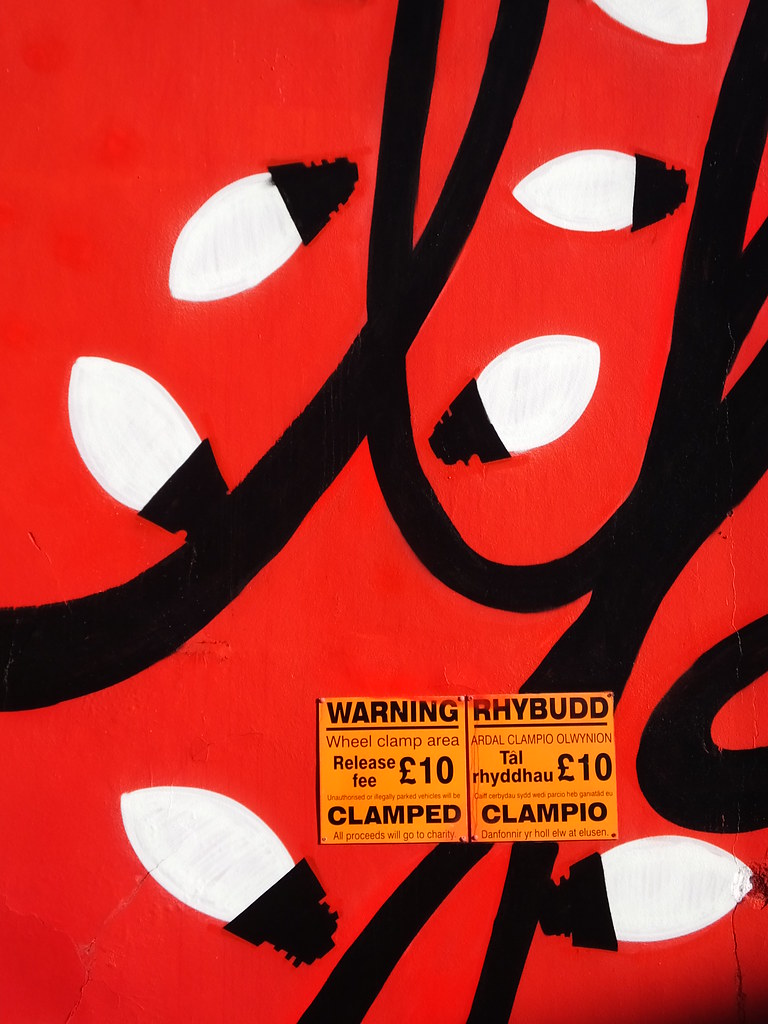 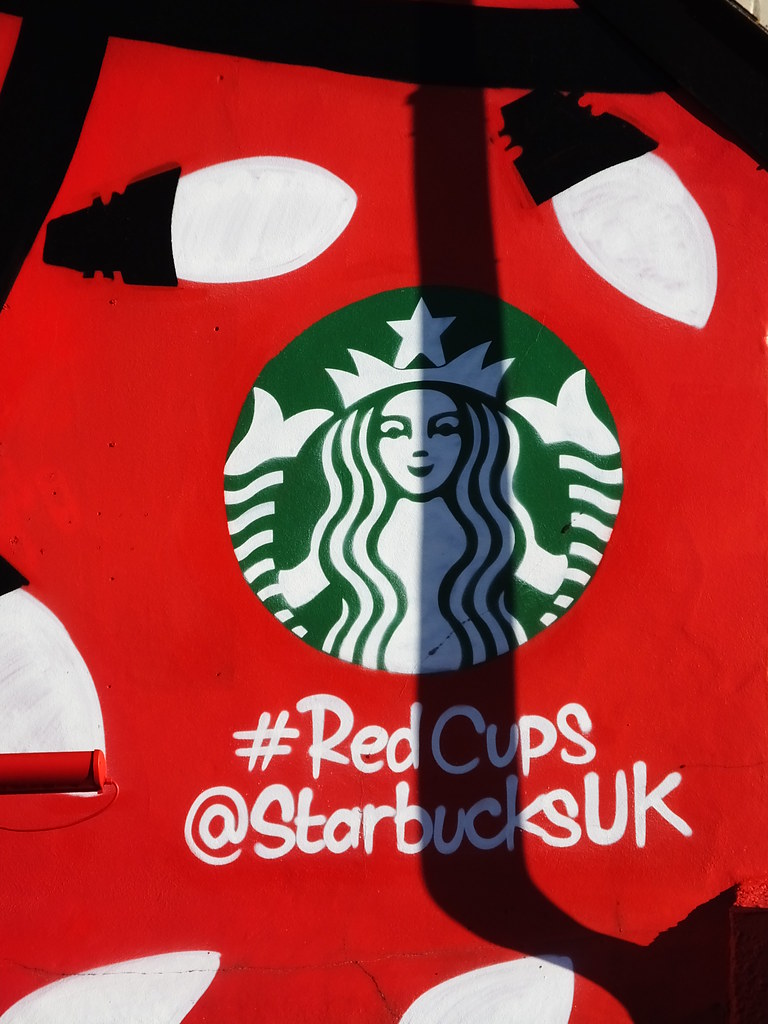 Each piece contains a Starbucks green logo and the hashtag #redcups alongwith the Starbucks Twitter address for the UK.
There doesn’t appear to be a signature or tag from each artist on the works. 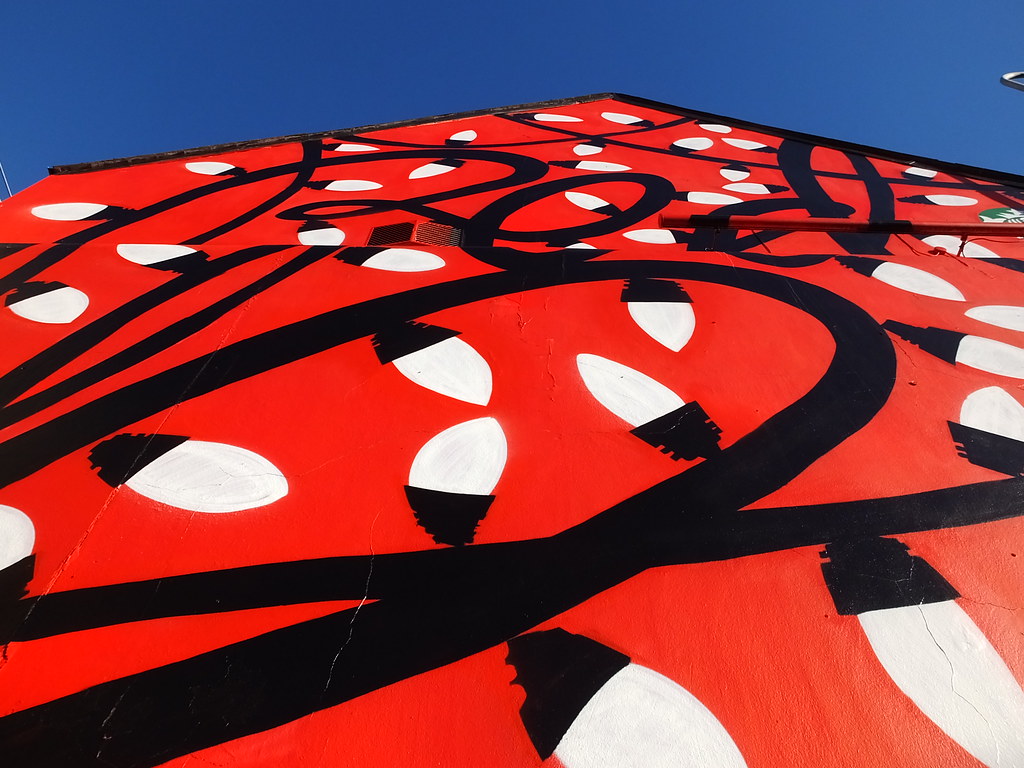 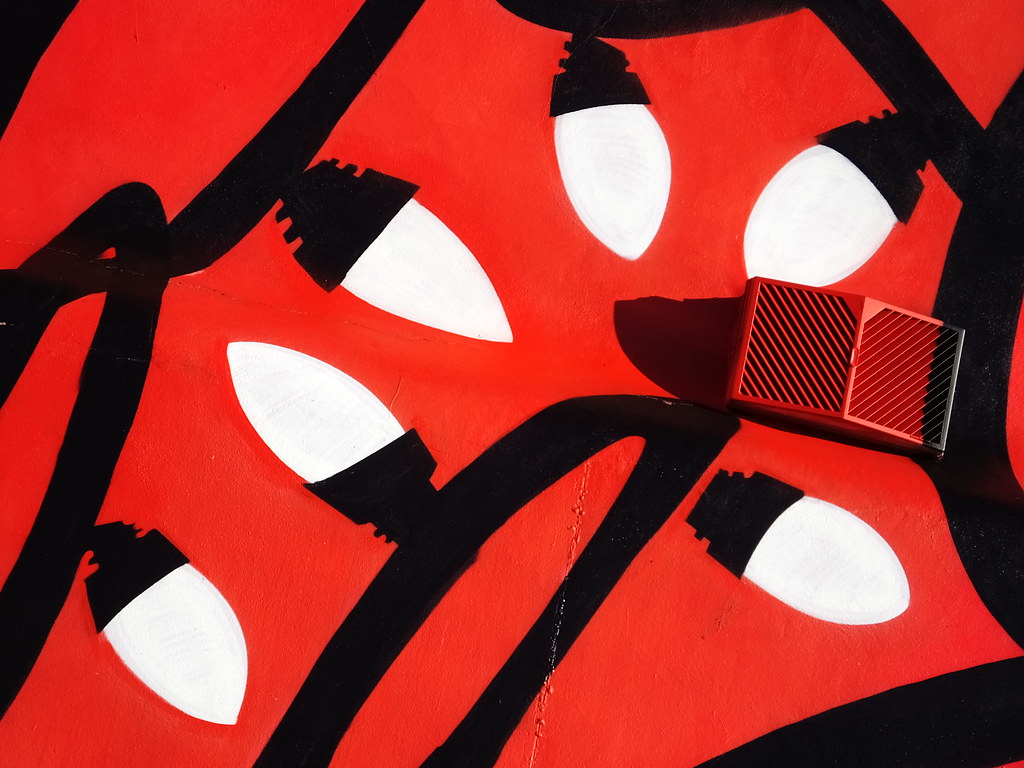 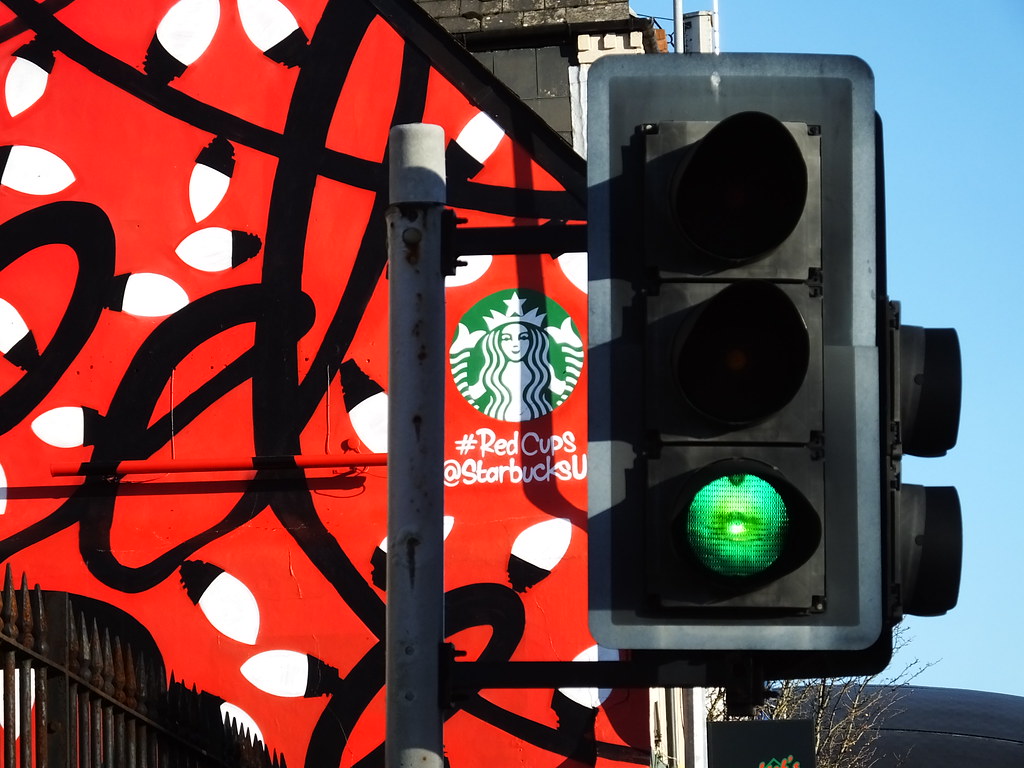 Further designs have been spotted in Manchester but for some reason it hasn’t been widely welcomed by the locals!

Firstly the wall contained a range of bare trees which were then replaced with more traditional snow-laden Christmas trees.

Set in Manchester’s Northern Quarter the snowy scene covers the entire side of the Hare and Hounds pub and caused a variety of reactions on Twitter.

@StarbucksUK this is absolutely vile! Get your filthy corporate hands off the Northern Quarter

@StarbucksUK get your corporate shit out of my Northern Quarter

You may not enjoy their coffee or think that they pay enough tax in the UK but at least the street art is brightening up some vacant walls throughout the country. 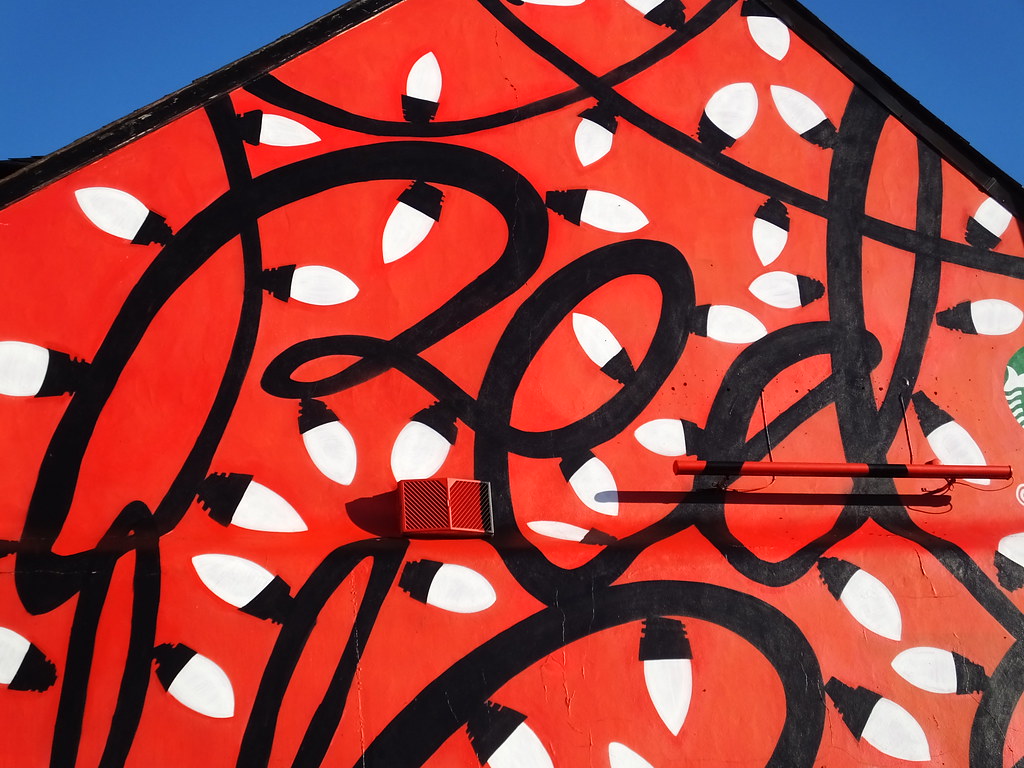 It seems the Starbucks backlash has kicked off in Brighton aswell.

Firstly Starbucks tweeted this in mid November which featured another interpretation of one of their festive cups on Trafalgar Lane in Brighton.

Then local retaliation against the lack of tax they pay into the UK was daubed across the wall, blacked out then daubed again!

@bhcitynews update on the @Starbucks situation at trafalgar street…. pic.twitter.com/lrtHOrX2yE

With eventually Snub23 finishing off the wall with his latest masterpiece.