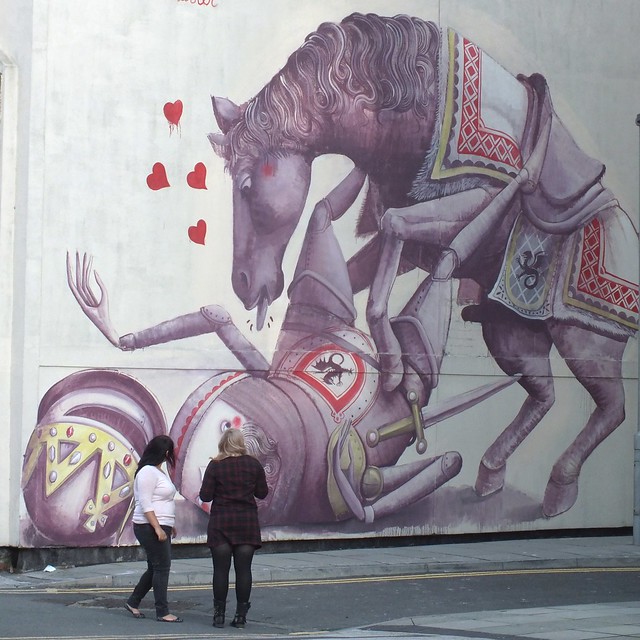 Italian artist Zed1 recently visited Cardiff to take part in the Empty Walls Festival.
Over a few days he painted his contribution of a horse and it’s fallen rider opposite the back of John Lewis.

A whole gallery of photos is available at the link below:-
https://diffgraff.wordpress.com/empty-walls-2014-zed1-horseplay/

“Graffiti showing an aroused horse trying to mount its fallen rider has prompted a resounding ‘neigh’ from residents.” – Wales Online

But the late addition of an erect penis to the horse has made headlines around the UK and further afield!
There were reports of local residents complaining to the council and police – so much so that the event organisers agreed to paint over the offending member – with permission from the artist Zed1.

“A giant graffiti mural showing a horse in a state of excitement was censored after complaints it was too explicit.” – itv.com

The story was featured prominently on the ITV and Wales Online websites with hundreds of users sharing the story via social media.
It also promoted a whole host of varied responses and mass debate via Facebook even though very few of them would have actually ever seen the original image!

Well let’s get this right straight away, this isn’t art its f*cking pornography, pure and simple.
In fact I would go as far as saying its beastiality, which is pretty sick to say the very least.
What next, women having sex with dogs? Kiddie porn even?
The dickheads that put this up not only want arresting and charging, they want keeping an eye on because no matter which way you look at this, it is pretty f*cked up and should not be presented for public viewing.
Artists they said. I say they’re nothing more than a collection of sicko perverts whom want nicking as soon as.
– Stephen E Garside

The offended win again I see. They should just fuçk off!
– Lewis Johnston

Now, if it had been a Banksy. They would be falling over themselves to buy it
– Vanessa Lee

Ok I’m going to go against most of the comments here and this isn’t a political correctness view at all. By the way banding around “political correctness” as a form of argument against an opposing view, isn’t a constructive argument. Now I agree with these residents, there is no way in the world I’d want to draw back my curtains in the morning to look upon a horse with a raging hard on about to mount it’s human rider. If you like it then maybe drop the artist a line and ask for it to be done outside where you live but I for one would be with these current residents in complaining.
– Paul Mews

Were the men jealous of him?
– Carrie Broon

Beastiality is what this is suggesting. Personally I don’t think it acceptable for public viewing.
– Caroline Whyte

How is it bestiality? Does the man have his trousers off ready? Or is the horse going to disrobe him?
– Alisha O’Brien

Painted over ‘the problem area’…. Pahaha. They aren’t even allowed to say it nevermind see it
– Nikki Holdcroft

So a horse attempting to mount a male human being with its cock hanging out is acceptable then is it Alisha? Would you want your kids seeing that on a wall in public? Nutter
– Stephen E Garside

Here are the before and after photos.
It’s not like trying to spot Where’s Wally but infact Where’s Wi…. well you get the idea with that one! 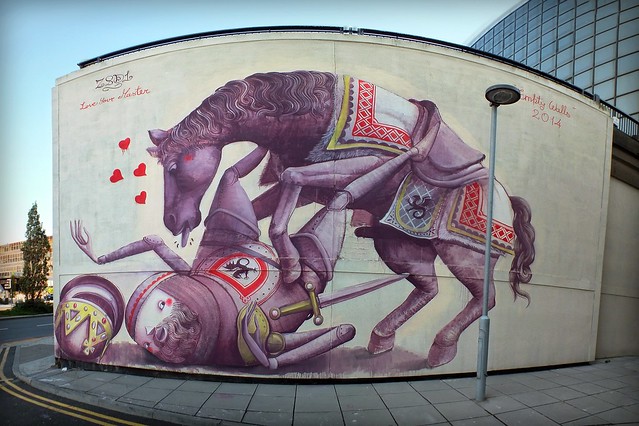 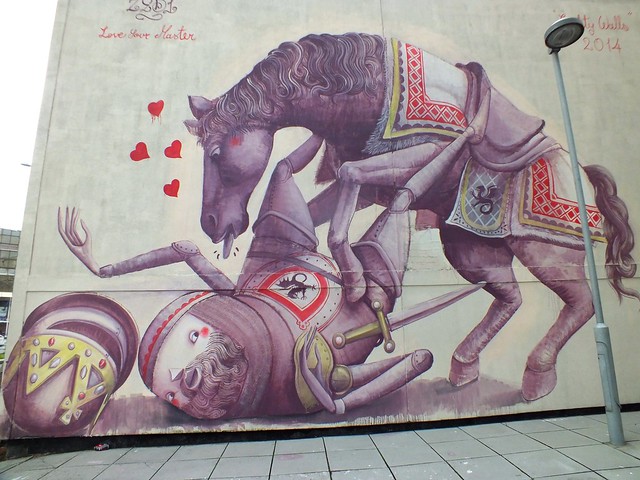