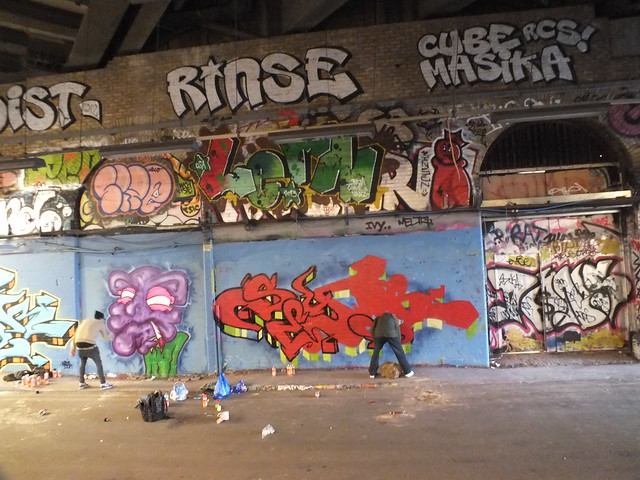 Whenever in London it’s always worth a visit to a legal graffiti wall located right beneath Waterloo train station – sounds like something from Harry Potter but it’s even more magical than that!

The Leake Street tunnel is a circular bricked tunnel which makes it’s way underneath the station but doesn’t carry any traffic apart from the odd vehicle to the garage near one end. 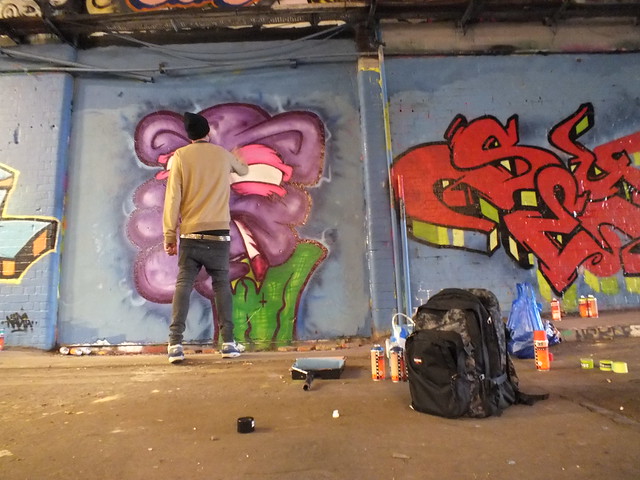 So it was with great delight to find numerous artists hard at work adding their latest creations to the already full walls.
Pieces can literally last just hours here before someone else arrives and uses the same space! Graffiti wars! 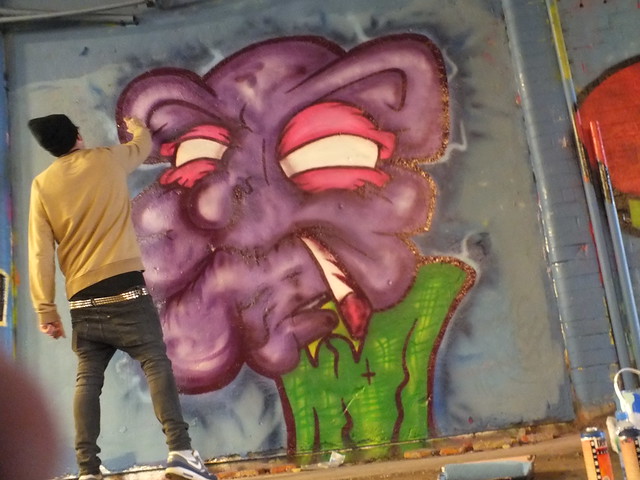 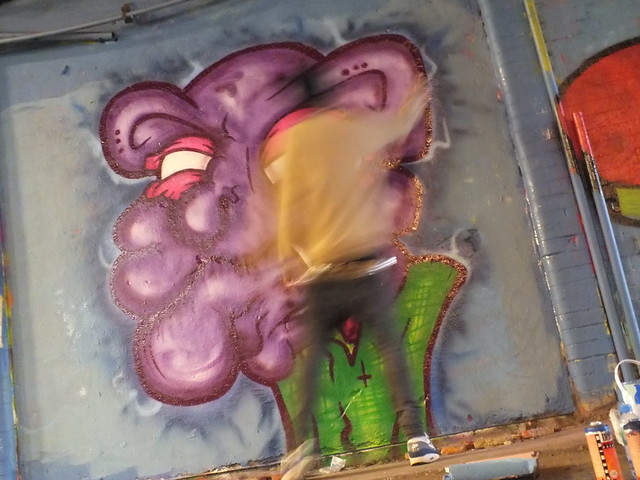 First up is 2DY just putting the finishing touches to his purple rodent character. Just look at all the equipment they bring to perfect their masterpieces – cans, bags, spirit levels and other paraphernalia! Studded belts are not essential! 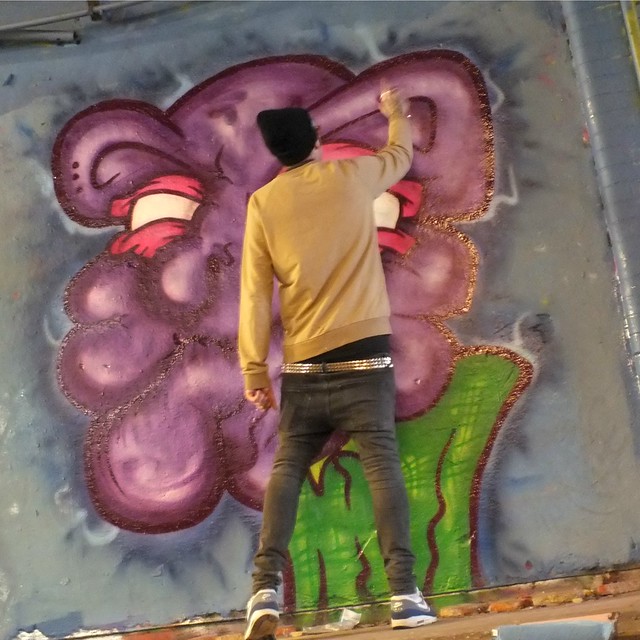 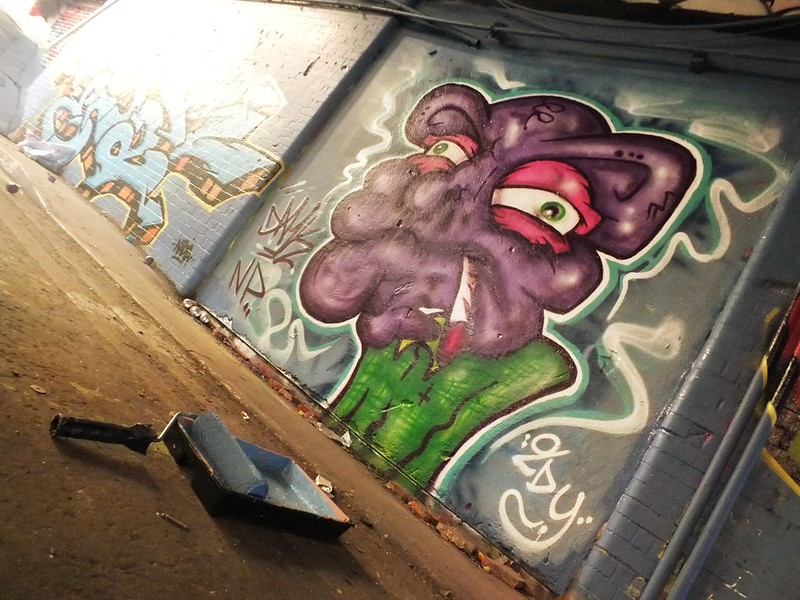 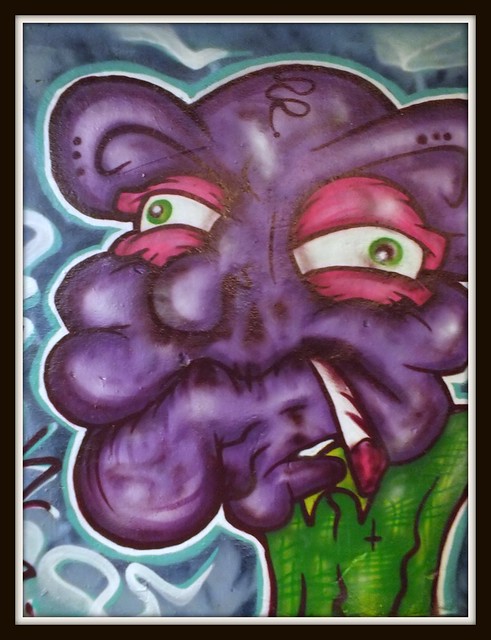 What a fantastic piece and love the colours and that spliff. Each artist was busy working whilst many groups of people, including graffiti tours, passed by and stopped to take photos. 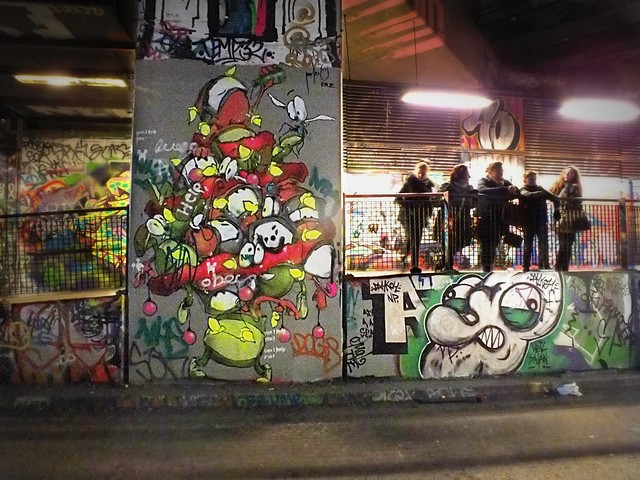 A little bit further into the tunnel and I stopped to chat to artist R5T – he said he had no idea what he was painting or what the inspiration was but he felt he wanted to come down and just paint!
Here he is just finishing off this five eyed thing! (look at the progression in the eyeballs!) 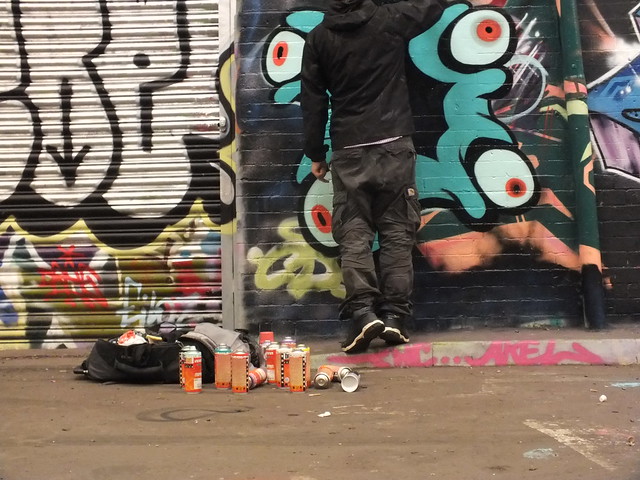 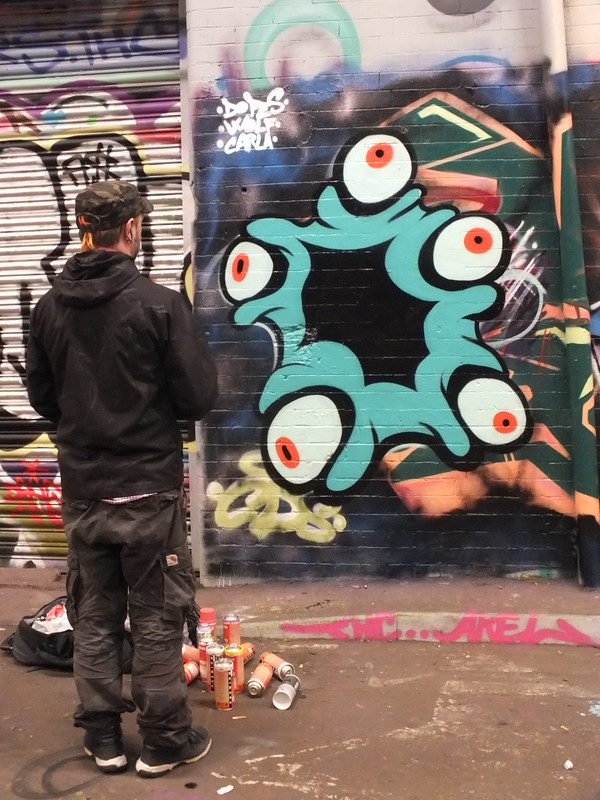 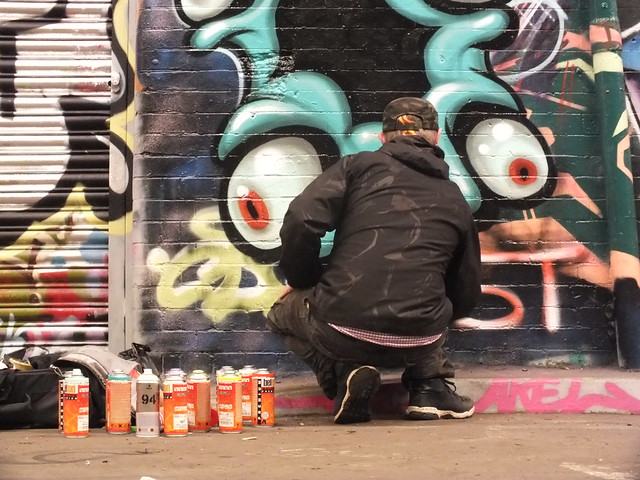 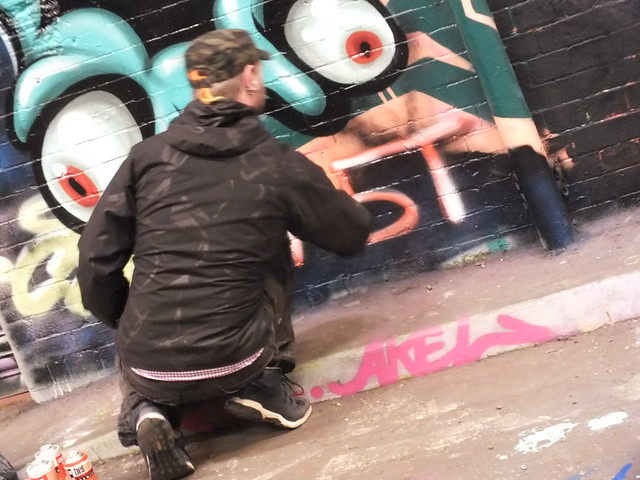 The artist offered me to have a go and add some strokes to his piece but I didn’t want to mess it up for him! (chicken!!!)
Once again loads of equipment and you can see the total concentration that goes into these pieces. 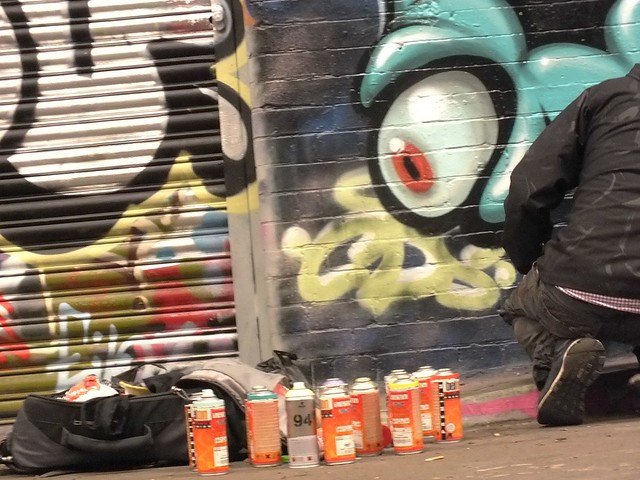 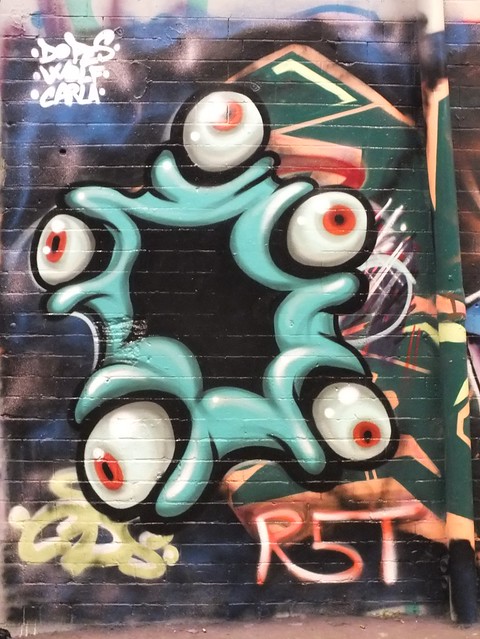 As I thought R5T had finished his piece I left him to it only to return later to find out that he had filled in the rest of the canvas bright red to emphasise what he had just painted – here’s the end result! Eye-popping! 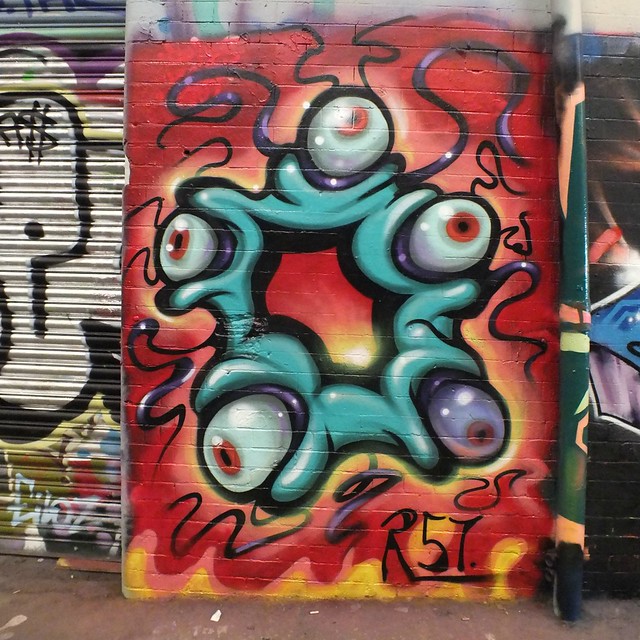 Further along I had noticed he’d been a busy man – a few more characters from him! 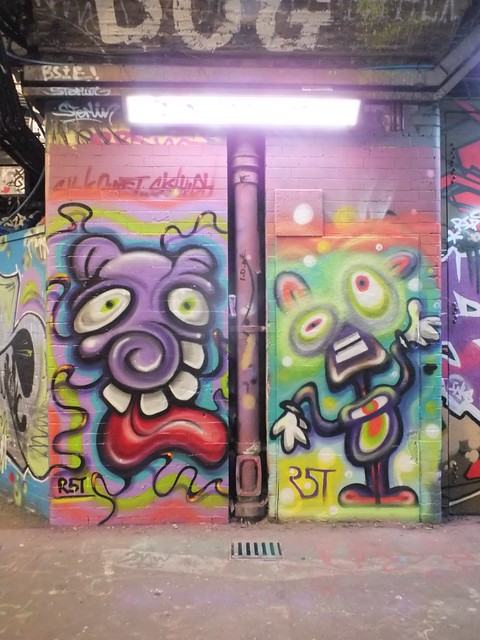 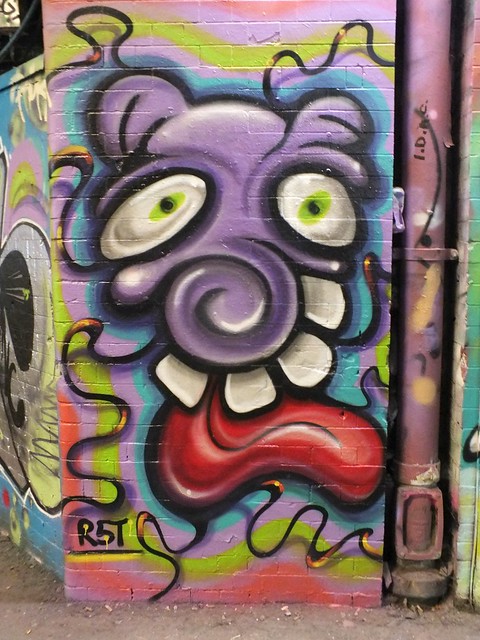 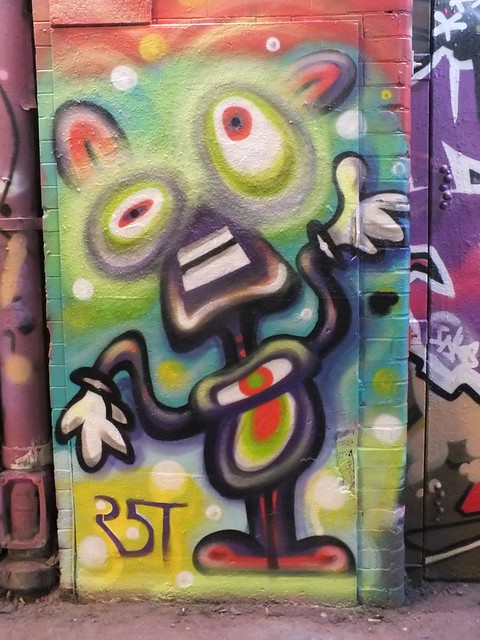